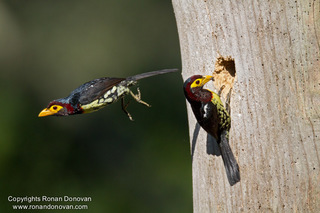 Yellow-billed Barbet
(Trachyphonus purpuratus)
Photo by Ronald Donovan
Enjoy his fabulous photos from http://www.ronandonovan.com/
Where can I find
Yellow-billed Barbet in Uganda?
This bird can be found in forest all over Uganda. 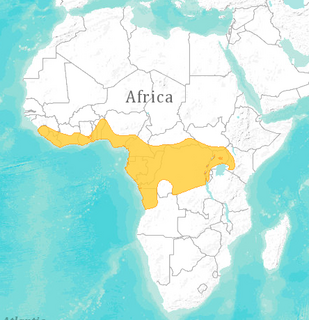 Press "read more" for the full Script of the program
18. Yellow-billed Barbet Trachyphonus purpuratus
NFA bird Podcast: I am Johnnie Kamugisha. The bird for today is a Yellow-billed Barbet.
Yellow-billed Barbet is a unique large barbet, glossy purple-black with yellow bill, face and chest.
Oh should I say a striking long-tailed forest barbet with a yellow bill and large patch of bare yellow skin around the eyes; but can be seen in wooded habitats as well.
They are about 25cm long, plump-looking, with large heads.
Their heavy bill is fringed with bristles.
The Yellow-billed Barbet call is heard often during their breeding season; that is Sept/Oct.
Yellow-billed Barbets are not selfish because they have been seen sharing nesting grounds (Dead trees) with other birds like Grey-throated Barbet, Narrow-tailed Starlings, Tinkerbirds etc.
Parents alternate to feed the chicks and as one goes to look for food, the other remains in the nest (cavity).
Sex look the same and so not that easy to which one is female or male.
They feed on a variety of fruits both in the forest and in cultivated.
They swallow the whole fruit and later regurgitate the indigestible material such as seed pits.
They are important seed dispersal agents.
Seed dispersal is likely to have several benefits for plant species. First, seed survival is often higher away from the parent plant.
Seed dispersal also allows plants to reach specific habitats that are favorable for survival, a hypothesis known as directed dispersal.
In the case of fleshy-fruited plants, seed-dispersal in animal guts (endozoochory) often enhances the amount, the speed, and the asynchrony of germination, which can have important plant benefits
They supplement the fruits with insects and once in a while, they may feed on lizards and frogs too.
They lay 2 - 4 eggs that are incubated for about half a month.
Yellow-billed Barbet Can be found almost in all forests like Budongo, Kibale among others.
The bird for today is a Yellow-billed Barbet and am Johnnie Kamugisha.
References:
-Bird of East Africa (Book),
-IUCN Red list http://www.iucnredlist.org/details/22684021/0
-The Birder's Handbook (Paul Ehrlich, David Dobkin, and Darryl Wheye. 1988. Simon and Schuster, New York)