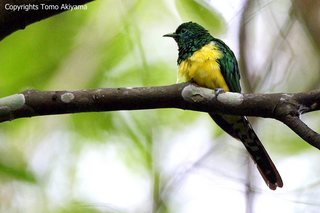 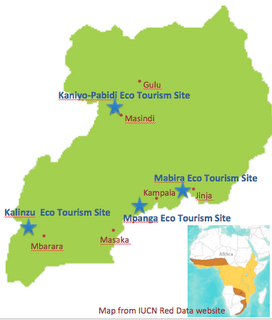 Press "read more" for the full Script of the program18. African Emerald Cuckoo Chrysococcyx cupreus
NFA bird Podcast: I am Johnnie Kamugisha. The bird for today is the African Emerald Cuckoo.
They are 23cm long that is from the beak to the tail.
An adult male of this bird is a stunning emerald-green above and yellow on the belly unlike any other bird.
I remember seeing it in very good light with my friend Patrick Cardwell and his better half Marie-Louise Cardwell and we all agreed it looked varlvet.
In flight, it shows black and white underwing coverts and dark flight feathers.
The female African Emerald Cuckoo is barred rufous and green above and barred white and green below.
The African Emerald Cuckoo lives a solitary life, but is wide spread and a common resident of moist forest.
I can say it has got a stable population trend since there is no evidence for any declines or substantial threats even though it has never been quantified.
It has got a very distinctive call that can't be mistaken for any other bird often translated as Hel-lo geor-gie.
They prefer patching up and calling from the canopy and it may take you a few minutes to the bird even though they are brightly coloured.
They are brood parasites like any other cuckoo.
They tend to parasitise Robins and Thrushes.
It is said that they are able to feed on hairy caterpillars because they pill off the stomach skin full of the hairs, push it out and a new one grows.
The African Emerald Cuckoo can be found almost in all forests like Budongo, Kibale, Echuya among others.
The bird for today is the African Emerald Cuckoo and am Johnnie Kamugisha.
References:
-Bird of East Africa (Book),
-IUCN Red list http://www.iucnredlist.org/details/22684021/0
-Orinothorogy -Frank Bgill(Book)