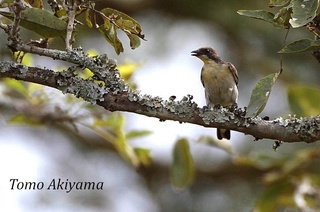 Greater Honeguide
(Indicator indicator)
Photo by Tomo Akiyama
Enjoy his awesome photos from http://www.wildlifejapan.com/wildlifejapan/
Where can I find
Greater Honeyguide in Uganda?
This bird can be found in forest all over Uganda. 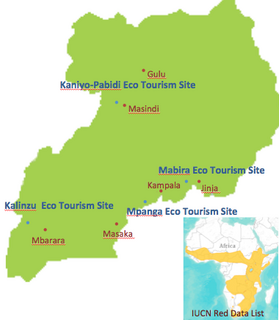 Press "read more" for the full Script of the program
19. Greater Honeguide
(Indicator indicator)
NFA bird Podcast: I am Johnnie Kamugisha. The bird for today is a Greater Honeyguide
This bird has got an interesting scientific name (Indicator Indicator)
The male Greater Honeyguide has a pinkish bill, a dark crown and throat and white ear coverts.
It feeds primarily on the contents of bee colonies (hives): bee eggs, larvae and pupae; waxworms; and beeswax.
Honeyguides are among the few birds that can digest wax.
Like other honeyguides, the Great Honeyguide enters hives while bees are torpid to the early morning.
Greater Honeyguide also scavenges at hives that man or any other animal honey badger has been looking for honey before.
Most remarkably, they also guide man to hives in exchange for honey.
Greater Honeyguide is one of the two Honeyguides that instinctively lead man to beehives the other being the Scaly-throated Honeyguide.
It guides by attracting man's attention with interesting or call it aggressive sounds as it flies towards the hive since they know where they are within their territory.
All Honeyguides have white outer tail feathers, which these flutter in front of the person in persuasion to follow them to the beehives.
It is said that, the honeyguide must be thanked with a gift of honey; otherwise, it may lead you to a lion a snake or any other wild animal to punish you.
All Honeyguides are brood parasites, and the Greater Honeyguide is no exception.
During the breeding season the male sits in the canopy and sings until a female in breeding condition responds.
The female lays between four and eight eggs in a season, and breaks an egg of the host bird for each one she lays.
They generally lay only one egg per host nest.
It is about 20cm long and weigh up to 47 gm.
They can be found in woodland, savannah, and even cultivated areas among others.
The bird for today is Greater Honeyguide and am Johnnie Kamugisha.