MP3•エピソードのホーム
著作 Kanako Tanaka の情報はPlayer FM及びコミュニティによって発見されました。著作権は出版社によって所持されます。そして、番組のオーディオは、その出版社のサーバから直接にストリーミングされます。Player FMで購読ボタンをタップし、更新できて、または他のポッドキャストアプリにフィードのURLを貼り付けます。
Do you need a nest? Let me make it with my bill!
>>Listen to the story about Yellow-breasted Apalis
Cannot listen? Download the sound file from here!
このブラウザでは再生できません。
再生できない場合、ダウンロードは🎵こちら 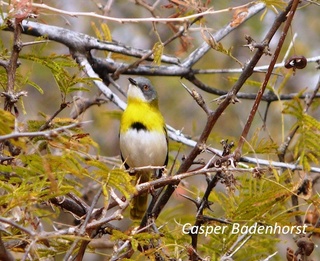 In Uganda, they can be found forest, bush and woodland except north western regeion.
Press "read more" for the full Script of the program
27. Yellow-breasted Apalis
(Apalis flavida)
NFA bird Podcast: I am Johnnie Kamugisha.
The bird for today is a Yellow-breasted Apalis.
This a complex species with several races which have been variously placed in two groups based on tail colour.
All forms are greenish above with yellow across the breast, and have varying amounts of grey on the crown.
Many have a small black spot spot.
It mainly eats insects, often restlessly foraging in the foliage of the canopy, gleaning prey from leave and twigs.
It builds a nest in an oval ball shape with a side entrance.
Its nest is made from grass, bark, tendrils, dead leaves, lichen, flowers, shrub among others mostly near old man's- beard lichen.
Egg laying season is from about October-March peaking around October-November.
It lays 2-3 eggs, which are incubated by both sexes for about two weeks.
The chicks are looked after by both parents, leaving the nest after about two weeks.
They also make an interesting call that sound almost similar to Grey-backed Camaroptera like two stone being knocked together.
Pairs are common and wide spread in a variety of woodland.
The bird for today is the Yellow-breasted Apalis and am Johnnie Kamugisha