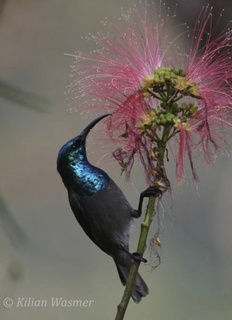 Blue-headed Sunbird
(Nectarinia alinae)
Photo by Kilian Wasner
Go to his website to see more great photos!
***The copy rights of this photo belongs to Kilian Wasmer
Where can I find
Blue-headed Sunbird in Uganda?
This bird distribute to Albertine Lift areas. 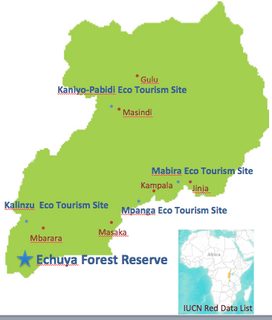 In Uganda, they can be found in the south western part.
Press "read more" for the full Script of the program
27.Blue-headed Sunbird
Nectarinia alinae
NFA bird Podcast: I am Johnnie Kamugisha. The bird for today is the Blue-headed Sunbird
Sunbirds are from the family Nectariniidae, of very small passerine birds.
The Blue-headed Sunbird has the head, throat and upper breast iridescent dark blue with a violet sheen.
Its mantle is dark saffron-olive and belly blackish.
Blue-headed Sunbird has bright red eyes.
When looked at well, one will see that the Blue-headed Sunbird has creamy-yellow pictorial tufts.
The Blue-headed Sunbird is a nectar lover but is particularly fond of Balthasarea and Loranthus flowers.
Flower tubes that bar access to nectar because of its shape, are simply punctured at the base near the nectaries. Cleaver birds. isn't it?
Although they feed largely on nectar, they also take insects and spiders, most especially when feeding young.
It makes spitted zit call often in flight and its unusual song is a long loud, rolling, spitted series that undulates as a sine wave.
They have a fast and direct flight on their short wings and they are 13cm.
The Blue-headed Sunbird has counterparts in two very distinctly related groups: the Hummingbirds of the Americas and the Honeyeaters of Australia.
The resemblances are due to convergent evolution brought about by similar nectar-feeding lifestyle.
Some sunbird species can take nectar by hovering like a humming bird, but have to perch to feed.
They are generally monogamous and often territorial, although a few species of Sunbirds have lekking behaviour.
They generally build purse-shaped, enclosed, suspended from thin branches with generous use of spiderweb.
The Blue-headed Sunbird is one of the albertine rift endemic birds that occur in Uganda.
They can be found in forests like Bwindi, Echuya and Mgahinga.
The bird for today is the Blue-headed Sunbird and am Johnnie Kamugisha