Slang. In this podcast Tony Thorne, former Head of the Language Centre, now Visiting Consultant, at King’s College, London and author of the Bloomsbury Dictionary of Contemporary Slang, looks at what slang is, how it’s used, where it comes from and what words are being used as part of our everyday language. 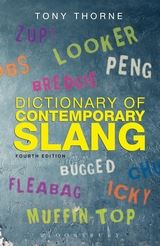 Slang should be easy to define, but in fact no one has ever come up with a satisfactory definition. Slang is one of the most informal varieties of language, it is usually new, controversial, exotic, often naughty and deviant (or pretends to be).

Probably all languages have had slang, but it was not recorded until the 18th century. It was marginal and taboo, the language of criminals, beggars and tramps.

It is a language that keep the outsiders out (parents, police etc) and using it makes you an insider, part of an exclusive elite. It is often developed in closed communities (prisons, public schools), and by private groups (taxi drivers, soldiers, sailors, criminals) but now that is not the main source of new slang – the internet has introduced something totally new – now most slang is developed by young people from 12 years of age. Words like

Some slang words have been around for over a hundred years, for example, ‘cool’, ‘dosh’, ‘punk’. Whereas punk has changed its meaning over that time, cool and dosh have stayed roughly the same, which is unusual because mostly slang has to be reinvented to remain exclusive.

Social media have had two main impacts on slang. Firstly they have introduced new language to go with what people do with a medium, eg FaceBook – ‘fraped’, ‘frenemy’, and LOL and OMG. Secondly, social media have enabled slang to spread, indeed we do not know where in the Anglosphere some words have originated – was ‘dint’ first used in Australia, Canada, US, the Caribbean, UK?

Lots of parents and teachers are afraid it is damaging young people’s ability to use standard language, but that is not the case, it is about speech communities who share a language. It does not usually undermine young people’s language ability. Most young people are very good at ‘code switching’, they don’t use slang in a job interview or essay, but they do use it in the club, in the street, in the school playground.

Slang is no longer taboo, it creeps into all the media – newspapers and magazines as well as online media. It is no longer forbidden, it is allowed in the home. And of course we no longer have those authority figures who in the past could proscribe the use of slang. Young people do not any longer listen to the police, the government or parents as a linguistic authority. They have their own domains in which to communicate. Saga has developed an app for the over 50s explaining sports slang to older people.

But old people can feel uncomfortable with all this – they feel they are losing control of language and language is, after all, what gives us our identity. There is a dictionary of ‘granny slang’ with words like ‘galivanting’ and ‘bamboozling’ – words that young people think are slang but are just colloquial expressions used by granny’s generation!

There is no danger in slang as long as we talk about it and analyse it, and it is good to exchange examples of slang between the generations.

17d ago2w ago
Subscribe
Unsubscribe
月ごとの+
The Birdy Num Num Indian podcast is all about inspiring the creative Indian.With over 35M views online spanning a career in IT and Stand Up Comedy, Indian-American comedian Sanjay Manaktala is the epitome of "because life begins after engineering." A good chunk of his guests also live by this philosophy. Every Monday and Thursday Sanjay talks creativity, dating, technology, life, current events and general life advice from the perspective of a 30 something Indian American guy traveling the w ...
L
Learn Chinese - Easy Situational Mandarin Chinese Audio Lessons

4d ago4d ago
Subscribe
Unsubscribe
月ごとの
A podcast about life, the universe and anthropology produced by David Boarder Giles, Timothy Neale, Cameo Dalley, Mythily Meher and Matt Barlow. Each episode features an anthropologist or two in conversation, discussing anthropology and what it has to tell us in the twenty-first century. This podcast is made in partnership with the American Anthropological Association and with support from the Faculty of Arts & Education at Deakin University.
L
Learn Hindi | HindiPod101.com

11d ago1w ago
Subscribe
Unsubscribe
月ごとの
Learn Hindi with Free Podcasts Whether you are student or a seasoned speaker, our lessons offer something for everyone. We incorporate culture and current issues into each episode to give the most informative, both linguistically and culturally, podcasts possible. For those of you with just the plane ride to prepare, check our survival phrase series at HindiPod101.com. One of these phrases just might turn your trip into the best one ever!
L
Let's Master English! An English podcast for English learners

2d ago2d ago
Subscribe
Unsubscribe
月ごとの
The Let's Master English podcast is for ESL (English as a Second Language) learners! This podcast has many features--news, Q&A, English learning advice and other fun sections. You can join the Let's Master English community on Google+ and see the full transcripts. Transcripts are made by you, the listeners! I hope you enjoy my podcasts and please visit my website--www.letsmasterenglish.com!
S
SUCCESS Podcasts

22h ago22h ago
Subscribe
Unsubscribe
毎日
SUCCESS Podcasts are shows for goal-oriented achievers. Hear from our Editorial Board about how they've achieved great heights and what they're doing to continue to climb.
M
Math Ed Podcast

8d ago1w ago
Subscribe
Unsubscribe
月ごとの+
In this podcast, German podcaster Annik Rubens talks slowly about topics of everyday German life, from beergardens to recycling. More information and Premium Podcast with learning materials on Slow German at www.slowgerman.com. You can read the complete transcript of each episode on this internet-site or in the ID3-Tags.
I
IELTS Podcast

21d ago3w ago
Subscribe
Unsubscribe
月ごとの
Survivalist Prepper, all about survival skills, prepping, preparedness and living off the grid without too much “tin foil hat” stuff. Learning how to become more self sufficient when disaster strikes. Stay up to date with the latest prepping news and information like bugging out, prepping and survival gear, and food storage etc.
500+以上のトピックを聴こう