Arts and Culture – Pod Academy « »
Return to the Bike Cemetery

‘A spindly shit coppice, with ghosts of plastic bags rustling in its branches.’ This week’s podcast, by artist Robin Bale, is an evocation of a windswept rubbish dump under the M11 motorway. It starts with the sounds of moving through undergrowth, traffic in the background. A twig snaps. Abstract and slow percussion fades in…….

[sound of traffic and birdsong fades. Percussion continues then fades]

I wish to talk about spaces. It could be that as soon as the first building was built and the city was founded, that there came into being a margin or corner – the angle of two walls, the space just down there, just past where the bins are. Only existing in relation to that building, only coming into existence with it, this site was where things were left, forgotten, hidden; with the understanding that they were left or forgotten there and should be left alone, although not far away. Almost in plain sight. Children, strangers and fugitives would go there and it would nearly be in sight and earshot of that first structure; just outside the window, just against the wall.

I wish to tell you about such a place, that I have named the Bike Cemetery.

The Bike Cemetery is a mere crumb of land, a piece of what I suppose could be called urban waste ground, an increasingly rare commodity in the city now, especially one less than a mile from the site of the 2012 Olympics – that place of victorious national becoming.

[sound of traffic fades in]

It is demarcated – you might say cut adrift – by a busy main road and a slip road and overpass for the M11. A spindly shit coppice, with ghosts of plastic bags rustling in its branches. The sort of place you might find yourself first light on a Monday morning, in the piss-thin drizzle, wondering how you got there and knowing that you were meant to be somewhere else and thinking “not again”.

As far as I know it lacks a name, so I have called it the Bike Cemetery. When I first came across it early this century it was full of the stripped carcasses of bicycles that I assume were nicked somewhere nearby and cannibalised on the site.

[traffic and percussion, with bird song field recording from site]

I have called it an entrance to the underworld, at other times, the unacknowledged centre of the city or the centre of the state. 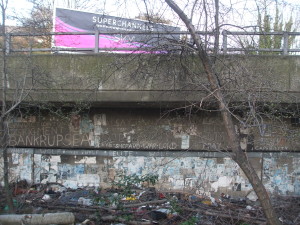 The Bike Cemetery also attracted a writer and bricoleur. The wall of the overpass was liberally graffitied. The texts, constructed from single words or short phrases, heavy on repetition and play, were not the usual – not political slogans, football chants, sexual slander or biblical quotations.

There were portmanteau words, a stuttering repetition of syllables, an obsessive chant running through its centre: Wolf Vanish.

This was interspersed with collaged printed matter, predominantly magazine images of animals, fashion photographs from the late 1980s, Monopoly money and food packaging; some porn, though not nearly as much as might be expected. Judging from the dates on the magazine pages the work was done sometime around 1991. [percussion returns] Due to the handwriting of the graffiti and the thematic consistency of the whole thing, and that the same paint was used to write and stick the images to the wall, I’d say that the entire wall was the work of one person. It has remained there for almost a quarter of a century, under different governments, different weathers.

After having been a fairly regular visitor to the site I have not returned there for around two years until yesterday, though it has been in my mind constantly.

It has become an anchor for my imagination – a place to stand, as a counterweight to the increasingly sanitised city that is ever more rapidly swallowing the older one; where many actually still live.

Paths that are almost…not quite paths, of the sort that small children and animals use…just a slightly less dense space amongst the nettles and brambles. I can’t yet see the wall, but I’m heading towards it…

And this is what I found; my discovery soundtracked by a serendipitous siren.

…and the wall and the bricolage has almost entirely gone, underneath some quite Hackney Wick-style professional-looking graffiti that says “costume” in a sort of cursive Edwardian script. Just underneath the ‘c’ in costume there’s “wolf”…

The avatars of the coming city – and citizen – stare from the hoardings that surround the proliferating building sites. They take the part of Walter Benjamin’s Angel of History, who exists outside of time, driven onwards by a storm in Eden and from that perspective, seeing history as a tidal wave of destruction.

The figures on the hoardings represent a future as if it is simply inevitable; already visualised, photographed, laminated and mounted in public view. 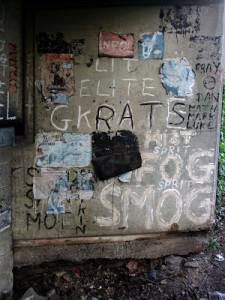 [chanting of Bike Cemetery texts begins in the background, with percussion and traffic]

They are the heralds of the destruction that they look back upon as if it has already happened: the estates bulldozed, the tenants dispersed. But unlike the angel, as if they are the obvious heirs smugly coming into their inheritance. They take no heed of the storm in Eden.

Robin Bale is a PhD candidate in Fine Art at Middlesex University. This podcast was produced as part of the Birkbeck Critical Waves project.and first aired on ResonanceFM earlier this year.

The post Return to the Bike Cemetery appeared first on Pod Academy.

11d ago1w ago
Subscribe
Unsubscribe
月ごとの
A podcast about life, the universe and anthropology produced by David Boarder Giles, Timothy Neale, Cameo Dalley, Mythily Meher and Matt Barlow. Each episode features an anthropologist or two in conversation, discussing anthropology and what it has to tell us in the twenty-first century. This podcast is made in partnership with the American Anthropological Association and with support from the Faculty of Arts & Education at Deakin University.
L
Let's Master English! An English podcast for English learners

10m ago10m ago
Subscribe
Unsubscribe
月ごとの
The Let's Master English podcast is for ESL (English as a Second Language) learners! This podcast has many features--news, Q&A, English learning advice and other fun sections. You can join the Let's Master English community on Google+ and see the full transcripts. Transcripts are made by you, the listeners! I hope you enjoy my podcasts and please visit my website--www.letsmasterenglish.com!
M
Math Ed Podcast

18d ago2w ago
Subscribe
Unsubscribe
月ごとの
Learn Hindi with Free Podcasts Whether you are student or a seasoned speaker, our lessons offer something for everyone. We incorporate culture and current issues into each episode to give the most informative, both linguistically and culturally, podcasts possible. For those of you with just the plane ride to prepare, check our survival phrase series at HindiPod101.com. One of these phrases just might turn your trip into the best one ever!
G
Grammar Girl Quick and Dirty Tips for Better Writing

5d ago5d ago
Subscribe
Unsubscribe
月ごとの+
In this podcast, German podcaster Annik Rubens talks slowly about topics of everyday German life, from beergardens to recycling. More information and Premium Podcast with learning materials on Slow German at www.slowgerman.com. You can read the complete transcript of each episode on this internet-site or in the ID3-Tags.
I
IELTS Podcast

11M ago45w ago
Subscribe
Unsubscribe
月ごとの
BackStory is a weekly public podcast hosted by U.S. historians Ed Ayers, Brian Balogh, Nathan Connolly and Joanne Freeman. We're based in Charlottesville, Va. at Virginia Humanities. There’s the history you had to learn, and the history you want to learn - that’s where BackStory comes in. Each week BackStory takes a topic that people are talking about and explores it through the lens of American history. Through stories, interviews, and conversations with our listeners, BackStory makes histo ...
I
Intelligence Squared U.S. Debates

12h ago12h ago
Subscribe
Unsubscribe
月ごとの+
America feels divided. From the most salient questions about our national identity and place in the world, to fundamental concerns about technology, religion, the economy, and public policy, Intelligence Squared U.S. is here to help. A respite from polarized discussions, we bring together the smartest minds to debate and dissect issues in depth, restoring civility and bringing intelligence to the public square in the process.
500+以上のトピックを聴こう