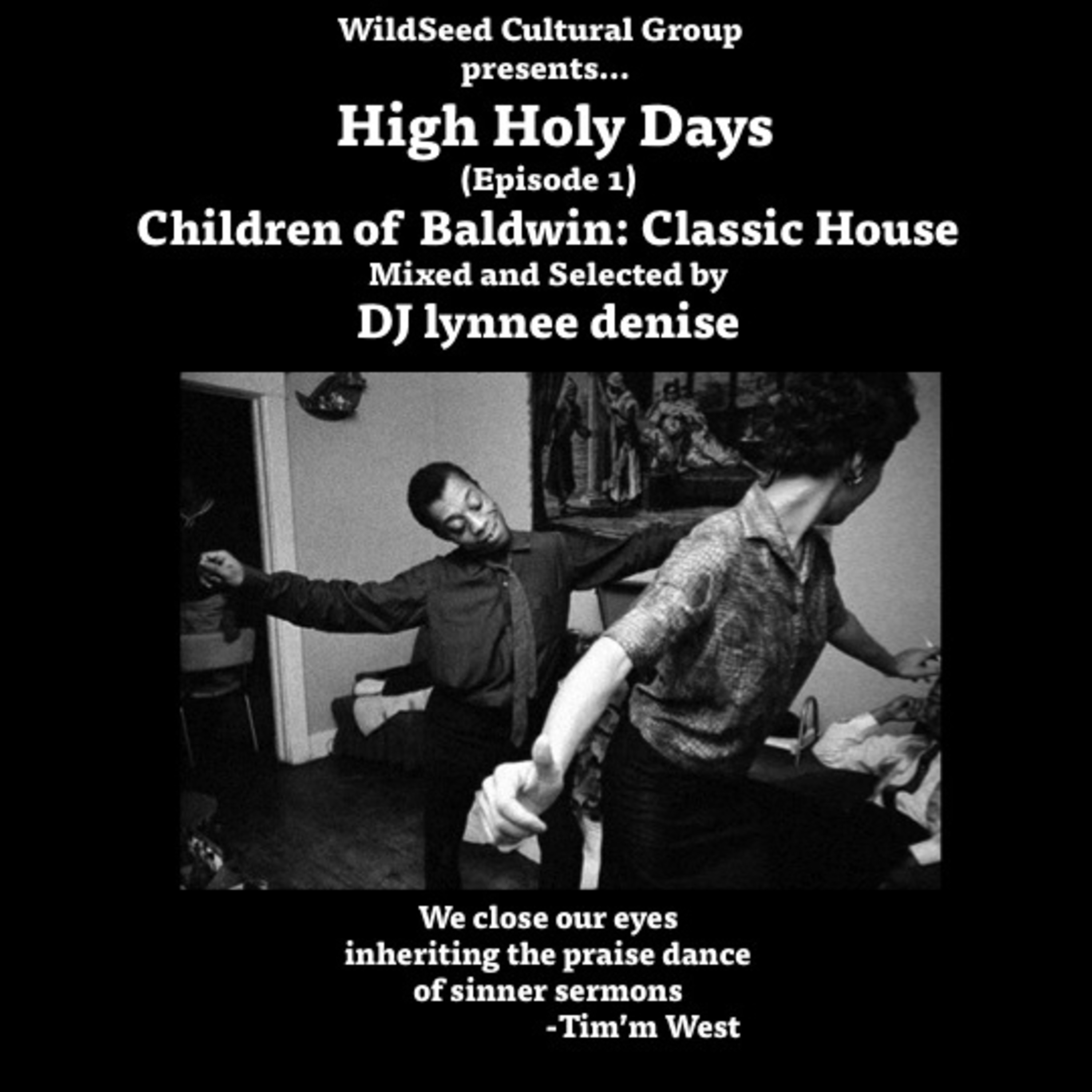 WildSeed Music NYC is proud to present its first ever double mixed cd, High Holy Days: The History and Future of House Music.
Episode 1 ”“The Children of Baldwin,” explores several periods of classic house where I mix both Chicago and New York City underground gay club hits to highlight the infant stages of house music. This compilation focuses on the music of two popular clubs credited with initiating the globalization of house music: Dj Larry Levan’s Paradise Garage Club in New York City and DJ Ron Hardy’s Music Box in Chicago. Many dancers, djs and listeners from the early house music community have succumbed to HIV/AIDS. When mixing this compilation, I made a conscious decision to honor the people who built the temples where “the children” dance, but did not have a chance to tell there stories. Both Ron Hardy and Larry Levan died in 1992 from complications related to intense drug use, although Ron Hardy’s death was also HIV/Aids related. One critical point that I’ve discussed in my project is the impact of addiction and the HIV/Aids epidemic on house music culture. Through this mix I hoped to have brought voice to the untold stories and visibility to the people that generated a global musical movement. This podcast premiered during the Atlanta Black Pride, one of three of the largest festivals in the country, in 2011. My aim for this release was to offer more than a party to celebrate our lives, but to lift the names of those who have passed on and to recognize what LGBTQ contribute to American culture.
Episode 2, “Mighty Real: The Sound of Tomorrow” pulls on current producers who incorporate elements of classic house, but also push beyond the borders of acceptable dance-floor grooves. Sylvester helped shape a soulful, yet formulaic genre of house music that focuses on spiritual-sexually-inspired falsetto vocals and driving, repetitive disco rhythms. This mix is dedicated to his artistry, fearlessness and commitment to authenticity.
Liner notes for High Holy Days feature two of my favorite scholars and house heads:
The first is Thokazani Mhblambi, A South African ill-disciplined musicologist; shifting between diverse creative genres, from classical music to sound art and display. I will interview Thokazani in South Africa to discuss electronic music (Kwaito and House) in the Post Apartheid era. The following excerpt was pulled from his article “Freedom in the Age of Democracy” and best describes the sentiment behind “The Children of Baldwin” mix.
“Music’s fluidity, its ability to exist in-context and in many other contexts simultaneously, can provide a stimulus towards the direction of freedom. But for house music to do this, it needs to be rescued from the context of excess and accumulation and loaded with transformative content of liberation. It needs to be freed from the ghettoes of global cultures of consumerism, which seek to marginalize the contributions of the church, gospel music, African spirituals, gay-club culture all of which have been foundational to its origins.”
Read the article in its entirety here.
http://www.archivalplatform.org/blog/entry/freedom_in_the/
The second scholar provides Haiku poetry inspired by Episode 2. This is none other than the author, poet, activist, lover, freedom fighter, professor, emcee, freestyler, vocalist, edutainer, tease, father, big brother, publisher, friend, papa bear, curator, scholar, raptivist, public intellectual, spiritualist, house-head: Mr. Tim’m West.
Jimmy B-boy blues
wide-eyed and full like his laugh
surrender to joy
We close our eyes
inheriting the praise dance
of sinner sermons
Sweet serenity
baby powder voudou dust
Eden where we dance

2d ago2d ago
Subscribe
Unsubscribe
毎日+
Barry first found music when he borrowed his sister's record collection when he was about eight and was hooked. When Caroline started it was a new beginning, and he listened to all the stations, but Caroline was his favourite by far. Later he became a singer in a band, then started doing discos when he was 18. He joined Caroline in 1977, touring the country with the Caroline Roadshow for 10 years, having great fun. Barry helped with tender trips and worked on the Ross Revenge in '84 and '85. ...
R
RA Podcast

6d ago6d ago
Subscribe
Unsubscribe
ウィークリー
Nothing but the blues, from the earliest to the latest, all genres
T
Too Much Rock

11d ago1w ago
Subscribe
Unsubscribe
ウィークリー
The Too Much Rock podcast is a 30-minute journey through the weekly music acquisitions of its creator. It may feature power pop, indie rock, post punk, indie pop, or any other named or unnamed genre.
R
RA Exchange

1d ago1d ago
Subscribe
Unsubscribe
ウィークリー
Eddie Trunk, the most well-known name in hard rock and metal music, brings his insight, commentary, reviews, discussion, and in-depth interviews to the podcast world! Join Eddie and his famous friends in rock and entertainment every week for a rollicking good time.
T
That's Not Metal

7d ago0w ago
Subscribe
Unsubscribe
ウィークリー
The world’s best rock & metal podcast bringing you all the latest news, cutting edge opinions, honest reviews and laughs every Friday. 100% passion, 100% honesty, 100% of the time. Join us. @notmetalpod on Twitter & Instagram. Come join the discussion with a likeminded community of music fans on the That's Not Metal Facebook Focus Group www.facebook.com/groups/TNMFocus/.
500+以上のトピックを聴こう