Hmmm there seems to be a problem fetching this series right now. Last successful fetch was on August&nbsp11,&nbsp2022&nbsp12:20 (

The death of writer and activist Nawal el Saadawi has just been announced. In 2011 Tess Woodcraft interviewed her at a conference organised by the Iranian and Kurdish Women’s Right Organisation for Pod Academy. We reproduce it here.

Typically, and at 80 years old, she had stopped off at the Occupy encampment around St Paul’s Cathedral on her way from the airport, before coming on to the conference.

Note: there is also an Italian translation of this podcast, by Federica di Lascio, below.

Nawal el Saadawi is one of the foremost Egyptian writers. A doctor by profession, she has written over 40 books of fiction and non-fiction, which have been translated into 30 languages. Since her very first novel, written in her twenties, she has taken on some of the most difficult, challenging, controversial subjects, including: female genital mutilation, domestic violence, child marriage, prostitution, the impact of war on women and children, so-called ‘honour killing’ and the laws that maintain women’s status as minors.

It is not surprising perhaps that this has made her many powerful enemies. She has been forced out of employment, she was imprisoned by the Egyptian authorities in the 1980s and in the 1990s she lived under serious death threats from religious fundamentalists. Indeed, she was forced into exile. But now she is back in Egypt where, although now in her eighties, she took an active role in the demonstrations in Tahrir Square last Spring and continues to fight to ensure that women’s rights are part of the political settlement in Egypt. Her writing and activism are seen by women around the world as a beacon of light and she has received many awards, literary and academic.

This interview was recorded at a conference in London organised by IKWRO, the Iranian and Kurdish Women’s Rights Organisation, which works to end honour killing and sexual violence against women.

Tess Woodcraft: What did you mean when you wrote in your autobiography: ‘writing is my sole refuge, it’s like breathing’?

Nawal el Saadawi: My work is my love and when you love your work you can do it well. Since childhood I was forced to study medicine, to become a doctor. But I didn’t dream of being a physician – I dreamt of art, music, poetry, dancing, writing novels.

Of course there is no separation of creativity in science and art, but when I was a child I loved to move my body, to dance and this is natural. But in Egypt at that time it was a taboo to be a dancer or a film actress, and it was very respectable to be a doctor. So I accepted the advice of my parents and went into the medical profession. But all the time I felt that my writing was my life, and all the time I kept a secret diary under my pillow, and I have never stopped writing from then till now. It is more than oxygen, it is my life. It is more than breathing

TW: How do you see the relationship between your writing and your political activism? 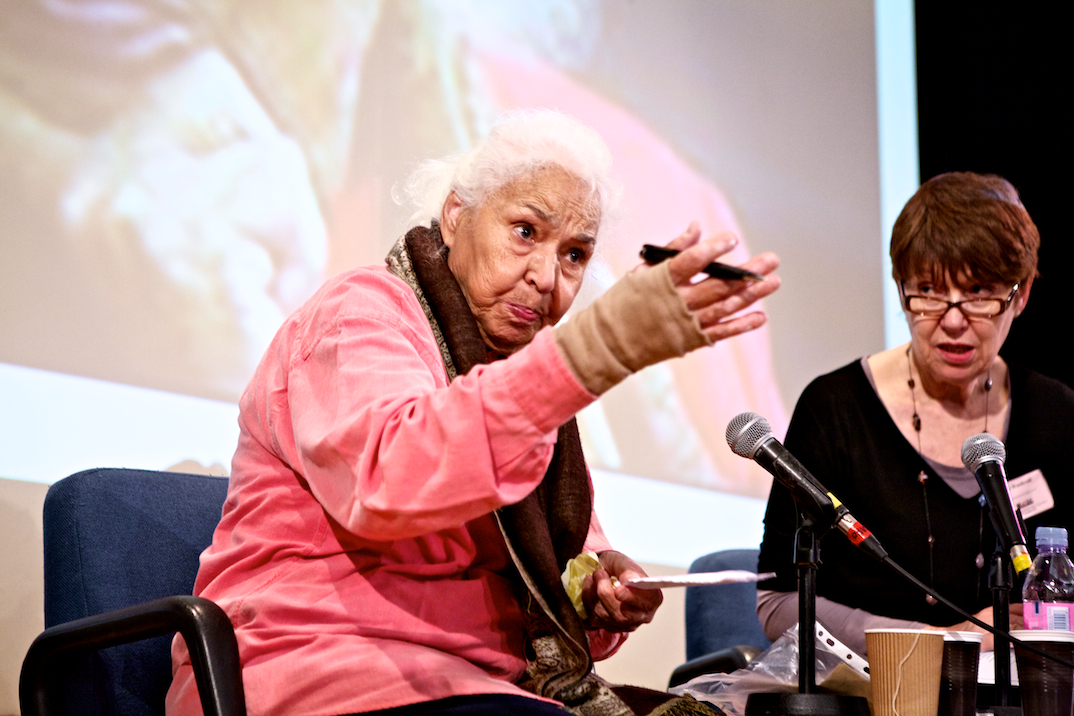 TW: You’ve tackled some of the most difficult issues, – one of these is female genital mutilation. Despite efforts to outlaw it, it is still practised in many countries. Is it possible to change this?

We have to study history. These are ancient historical customs. They are political customs, economic customs, sexual customs – and they are all related.

If we can just understand the causes of any problem, then we can eradicate it. This is something we studied in medical school – you cannot cure anything (and that goes for Female Genital Mutilation (FGM), honour killing and so on) if we do not know the real reasons.

N el S: Of course there is still honour killing in Egypt today. I can give you two stories that were horrible but significant. (But, despite this, I am also optimistic that we are going forward). We need to empower the mother because, as these two stories demonstrate, when the mother is weak, she may even help in killing her own daughter.

I live in Shoubra and the next district along is called Imbabe. It was there that there was a horrible honour killing. We saw in the street the mother cheering and walking in the streets. Next to her was her son who had killed her daughter; he was carrying the head of his own sister. He was carrying the head of his sister, showing the people that he had restored the honour of his family. And there was the mother of the girl, beside him, walking in the street and cheering because her daughter had been killed. So you see how the mother herself is a slave to the concept of patriarchy and how she can betray her daughter by leaving her to be killed. This woman was educated, which shows that education sometimes does not make any difference.

Another story from Northern Egypt shows an opposite situation. It is about a powerful mother who, though not educated, had dignity, common sense, intelligence and personality. She loved and protected her daughter who was raped by her paternal cousin and became pregnant. The father, the cousin who had raped her, his father and the uncles gathered together and said, this girl should be killed for the honour of the family. They said this even though they knew that it was the cousin that raped her. Because the honour of the family is above ethics, above conscience, above everything. These men planned to kill the girl, who was very young, only 16. But the mother said no. They decided to force the girl into having an abortion and then to kill her. They planned all this but the mother was aware and she went with them to the hospital and never left her daughter’s side. Whatever they said to her, she responded, ‘No, I am going to stay with my daughter until the end’. And in the end these men killed the mother and daughter together because they could not get rid of the mother. Of course, the mother failed in spite of her power but we need to train and educate mothers so that they can have dignity and understand justice and patriarchy. We need to empower women with education and economic independence so they are not so weak that they submit to the concept of killing their daughters and can help save them instead.

TW: That brings us very naturally to the situation in Egypt now. You took an active part in the demonstrations in Tahrir Square – and here at St Paul’s. You said that you had been waiting your whole life for the revolution.

TW: Watching it on television here, there seemed to be many women involved in Tahrir Square and yet you have said women must move very fast if they are to secure their rights in Egypt.

TW: So do you think women’s rights are a divisive issue in Egypt?

Nawal el Saadawi is published in the UK by Zed Books.

There is a report of the IKWRO conference, Whose honour is it anyway?, on the organisation’s website

1M ago5w ago
Subscribe
Unsubscribe
月ごとの+
We are a Filipino-Chinese couple living in the heart of Manila. We have been together for 20 years and decided to make this podcast to share our life experiences. Our podcast has no format and may discuss random things like relationships, recommended food in Binondo or about our philosophy in life. If you like our podcast, don’t forget to click the subscribe/follow button and give us a 5 star rating ^.^ Please visit our FB page @kwentuhansessionsph and ig page @kwentuhansession. You can also ...
T
The History of Rome

5+ y ago5+ y ago
Subscribe
Unsubscribe
月ごとの
A weekly podcast tracing the history of the Roman Empire, beginning with Aeneas's arrival in Italy and ending with the exile of Romulus Augustulus, last Emperor of the Western Roman Empire. Now complete!
T
TED Talks Daily (SD video)

2d ago2d ago
Subscribe
Unsubscribe
ウィークリー+
TED is a nonprofit devoted to ideas worth spreading. On this video feed, you'll find TED Talks to inspire, intrigue and stir the imagination from some of the world's leading thinkers and doers, speaking from the stage at TED conferences, TEDx events and partner events around the world. This podcast is also available in high-def video and audio-only formats.
B
BackStory

2+ y ago2+ y ago
Subscribe
Unsubscribe
月ごとの
BackStory is a weekly public podcast hosted by U.S. historians Ed Ayers, Brian Balogh, Nathan Connolly and Joanne Freeman. We're based in Charlottesville, Va. at Virginia Humanities. There’s the history you had to learn, and the history you want to learn - that’s where BackStory comes in. Each week BackStory takes a topic that people are talking about and explores it through the lens of American history. Through stories, interviews, and conversations with our listeners, BackStory makes histo ...
S
Slow German

24d ago3w ago
Subscribe
Unsubscribe
月ごとの
In this podcast, German podcaster Annik Rubens talks slowly about topics of everyday German life, from beergardens to recycling. More information and Premium Podcast with learning materials on Slow German at www.slowgerman.com. You can read the complete transcript of each episode on this internet-site or in the ID3-Tags.
S
Smart People Podcast

13d ago1w ago
Subscribe
Unsubscribe
月ごとの+
Smart People Podcast is a biweekly, interview-based podcast that features today's most well respected thought leaders engaging in authentic, insightful conversation for the benefit of the listener. The host, Chris Stemp, and his co-host/producer Jon Rojas, utilize their insatiable curiosity and relatable charm to provoke their guests into giving the interview of a lifetime. Every single guest has achieved a high level of recognition within their arena and in doing so has collected a wealth o ...
I
IELTS Podcast

19h ago19h ago
Subscribe
Unsubscribe
毎日
Thought share about the application of Islamic belief and ethics in our modern pluralistic society. The “How”, for those who understand “Why”. And the “Why” for those who need to understand the reason.
M
Move Your DNA with Katy Bowman

11d ago1w ago
Subscribe
Unsubscribe
月ごとの
Although the world is becoming mostly sedentary, our bodies still require a wide variety of daily movements in order to work well. Many of us struggle to get regular exercise, but even that can fall short of nourishing the body from head to toe. How can we move more—a lot more—when we have sore, stiff parts and overly busy lifestyles? Join Katy Bowman M.S., biomechanist, author, and movement educator as she combines big-picture lessons on biomechanics, kinesiology, physiology, and natural hu ...
T
The Greatness Machine

3d ago3d ago
Subscribe
Unsubscribe
ウィークリー+
The Greatness Machine is on a Quest to Maximize the Human Experience! Join Award Winning CEO and Author, Darius Mirshahzadeh (pron. Mer-shaw-za-day), as he interviews some of the greatest minds in the world―turning their wisdom and experience into learnings and advice you can use in your life so that you can level up and create greatness. Join Darius as he goes deep with guests like: Gabby Reece, Amanda Knox, Former FBI Negotiator Chris Voss, Jordan Harbinger, Former Spy and CIA Agent Andrew ...
500+以上のトピックを聴こう