Pat Thane, Research Professor at King’s College, London and Professor Emerita, University of London, explores the social and political history of Britain over the past 100+ years with Pod Academy’s Lee Millam, as they discuss her latest book, Divided Kingdom.

This podcast is a tour de force as Professor Thane takes us from the founding of the Labour Party in 1900 in response to low wages and poor working conditions, through 2 world wars and the arrival of globalisation with its attendant precarity and poverty wages. Highlighting changing living standards and expectations and inequalities of class, income, wealth, race, gender and sexuality, she reveals what has (and has not) changed in the UK since 1900, explaining how our contemporary society, including its divisions and inequalities, was formed.

Over the years there are recurring themes such as housing shortages and women’s campaigns for equality, and there are some surprises – the much derided 1970s were actually the time of the greatest equality! 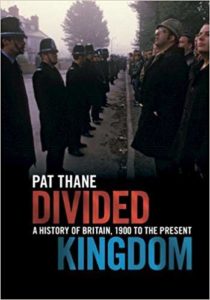 Divided Kingdom, a history of Britain 1900 to the present by Professor Pat Thane is published by Cambridge University Press.

24d ago3w ago
Subscribe
Unsubscribe
月ごとの+
The Birdy Num Num Indian podcast is all about inspiring the creative Indian.With over 35M views online spanning a career in IT and Stand Up Comedy, Indian-American comedian Sanjay Manaktala is the epitome of "because life begins after engineering." A good chunk of his guests also live by this philosophy. Every Monday and Thursday Sanjay talks creativity, dating, technology, life, current events and general life advice from the perspective of a 30 something Indian American guy traveling the w ...
C
Conversations in Anthropology

5d ago5d ago
Subscribe
Unsubscribe
月ごとの
A podcast about life, the universe and anthropology produced by David Boarder Giles, Timothy Neale, Cameo Dalley, Mythily Meher and Matt Barlow. Each episode features an anthropologist or two in conversation, discussing anthropology and what it has to tell us in the twenty-first century. This podcast is made in partnership with the American Anthropological Association and with support from the Faculty of Arts & Education at Deakin University.
B
BackStory

10M ago44w ago
Subscribe
Unsubscribe
月ごとの
BackStory is a weekly public podcast hosted by U.S. historians Ed Ayers, Brian Balogh, Nathan Connolly and Joanne Freeman. We're based in Charlottesville, Va. at Virginia Humanities. There’s the history you had to learn, and the history you want to learn - that’s where BackStory comes in. Each week BackStory takes a topic that people are talking about and explores it through the lens of American history. Through stories, interviews, and conversations with our listeners, BackStory makes histo ...
T
The History of Rome

4y ago4y ago
Subscribe
Unsubscribe
月ごとの
A weekly podcast tracing the history of the Roman Empire, beginning with Aeneas's arrival in Italy and ending with the exile of Romulus Augustulus, last Emperor of the Western Roman Empire. Now complete!
L
Lexicon Valley

10d ago1w ago
Subscribe
Unsubscribe
月ごとの+
Lexicon Valley is a show about language, from pet peeves, syntax, and etymology to neurolinguistics and the death of languages. Hosted by linguist John McWhorter.
S
SUCCESS Podcasts

8h ago8h ago
Subscribe
Unsubscribe
毎日
SUCCESS Podcasts are shows for goal-oriented achievers. Hear from our Editorial Board about how they've achieved great heights and what they're doing to continue to climb.
J
John Piper Sermons

5d ago5d ago
Subscribe
Unsubscribe
月ごとの
John Piper is founder and teacher of desiringGod.org; he is author of more than 50 books and travels regularly to preach and teach. New messages are posted to this podcast as they become available. Piper’s sermons, books, articles, and more are available free of charge at desiringGod.org. We want people everywhere to understand and embrace the truth that God is most glorified in us, when we are most satisfied in him.
S
Slow German

9d ago1w ago
Subscribe
Unsubscribe
月ごとの+
In this podcast, German podcaster Annik Rubens talks slowly about topics of everyday German life, from beergardens to recycling. More information and Premium Podcast with learning materials on Slow German at www.slowgerman.com. You can read the complete transcript of each episode on this internet-site or in the ID3-Tags.
T
TED Talks Daily (SD video)

23h ago23h ago
Subscribe
Unsubscribe
ウィークリー+
TED is a nonprofit devoted to ideas worth spreading. On this video feed, you'll find TED Talks to inspire, intrigue and stir the imagination from some of the world's leading thinkers and doers, speaking from the stage at TED conferences, TEDx events and partner events around the world. This podcast is also available in high-def video and audio-only formats.
L
Learn Spanish | SpanishPod101.com

12d ago1w ago
Subscribe
Unsubscribe
月ごとの
Learn Spanish with Free Podcasts Whether you are student or a seasoned speaker, our lessons offer something for everyone. We incorporate culture and current issues into each episode to give the most informative, both linguistically and culturally, podcasts possible. For those of you with just the plane ride to prepare, check our survival phrase series at SpanishPod101.com. One of these phrases just might turn your trip into the best one ever!
500+以上のトピックを聴こう