In this podcast, Jo Barratt of Life In Scents goes to the new exhibition at CHELSEA space to experience a new work by Oswaldo Maciá, which takes the form of an olfactory–acoustic sculptural composition.

The Library of Cynicism uses the ancient Greek figure of Diogenes as a starting point to undo assumptions of truth and belief through a sound and smell experiment with objects.

Jo talked to Oswaldo about his work. But first he met Donald Smith, Director of Exhibitions at CHELSEA Space, which is part of Chelsea College of Art and Design. It holds 5 or 6 exhibitions every year working with external art and design professionals on experimental curatorial projects.

Donald Smith: I went to see an exhibition of olfactory art in Paris about 15 years ago, and thought that we were about to see a great outpouring of works containing smells, but in fact it is still un-mined territory. I was interested in how Oswald talks about the audio-olfactory, of course we are more used to talking about the audio-visual. The response to the show has been fantastic, suggesting that there is an interest there if you present things to people. 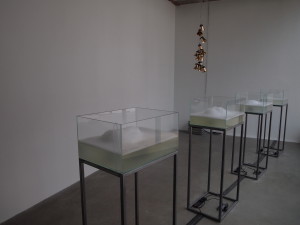 Then there are the philosophical and intellectual levels that Oswaldo is looking at. The exhibition is called the Library of Cynicism, and he’s been researching the history and ideas of cynicism.

Oswaldo Maciá: We are using expressions from the school of cynics – which I analyse from a smell and from an acoustic point of view. I have put together 5 smells, each in its own aquarium with the sound in the background – which has nothing to do with the cynics – it is a symphony of cicadas.

DS: The curator, Teresa Gleadowe, has described the Chelsea Space as ‘the smallest spiral in the world’. You come in through the front door, there’s a corridor and an entrance space and then a long narrow ramp space and then you turn the corner into the light of the main space. As you go up the ramp there is nothing, then you see some of Oswald’s drawings that seem to represent bubbly forms, and you turn the corner and there are the actual bubbles of the smell tanks in the main installation. The architectural form is used like a metaphor for an immersion tank and you have to make your way to the surface.

Jo Barratt: So, we curl up the corridor emerging into the noise of bubbling scent tanks and cicadas. And Oswaldo reveals another way the space chimes with his work…

OM: The snail shape of the gallery makes an interesting link with how sounds are transformed from waves into electronic information in our brains – through the concha, the shell shapes and spirals of our ears.

JB: Smells are an unusual material for an artist, and Oswaldo explains how he uses scent in his art, how we relate to it and how it works with the other elements he uses to create his multi-sensory scenarios.

OM: Once, I was living in the same city as Garcia Marquez. He had written a book called The smell of the Guava – about the way that when the Guavas are ripe (they are rather like the fig), it is a time of celebration – everyone cooks with them, makes sweets with them, and there is a smell that no one can ignore – it is the seeds of the fruit. Marquez’s book is translated into several languages, and I asked him how could someone who has never smelled this fruit, really understand what you are talking about. Someone from Norway, for example. And he said, with a smile, that they go into their memory and find something that means something very similiar – for a Norweigan maybe the smell of fish – and they take this smell that is already in their memory and apply it to the smell of Guava. And it’s true, after my second reading I realised that you associate the smell with something you already have, you give it a name and you embed it in the archive in your brain. So next time you smell something new, you know exactly.

JB: What do you mean by an ocular-centric mode of perception?

OM: Ocular comes from vision, and centric means centred. An artwork that is ocular centric focuses on the queen of the senses – vision.

In western society, vision, seeing, equals truth. But we are ignoring something, vision is only one way that information gets into our brain. In our brain we have just one language – electronic language, neurons – but the information gets in there in many different ways. As the Greeks said, ‘ things make sense when all the senses work together!’ So art is running behind how we understand.

JB: Do you hope, through your work, to change how people see their lives?

OM: Yes, in the way we perceive knowledge. We relate to the external world, but we don’t ‘see’ it through one sense.

We read the newspaper every day, select the lead, read an article, move to the next page, scroll down. We receive so much information in an ocular way, that we are completely anaesthetised by this kind of thing.

The language in our brain is an electronic language, just one language to form the perception of everything that surrounds us.

So it is the perceiver that interests me. That is why I have created the ocular acoustic compositions. I’ve called it a libraries of the senses. The library of smell can mix with the library of audio and can create a re-read of the information we have. Things make sense when all the senses work together. So, I don’t have to respond to the acoustic piece, the sound piece directly with the aural, I can use smell, too – the brain is so vast. I like to create the smell pieces thinking not just of the olfactory but of the vision as well, the frame holders.

The name is another part of the piece. You read, and immediately a image comes to mind. You can’t ignore the title. The title is as important as the table or the stand. Each element works in conjunction but they are not strictly responding one to another.

So I have created scenarios. The olfactory could develop a narrative and the acoustic another narrative. And the visual could be the bridge between the two.

We need to go back a hundred to years to Duchamp who made it clear that the brain of the people finishes the piece. So in a scenario, a circumstance can happen. I made a piece two years ago with a bath tub running with black water, the smell was carrot seeds. Do you know that smell? No? No one can describe it. I want to put people in a place where they have to rethink what they know. That’s how the art work functions, to re-shape, to re-evaluate what you consider to be knowledge. What you know, but you don’t know. So that you re-question – what did you perceive?

I like to stand the audience, the receiver, on the board of the senses. It’s something we don’t like to admit – our limited perception.

JB: This exhibition – what does Library of Cynicism mean, what are you trying to do with this show?

OM: The cynics have been on my table for some time. And in this political situation we can no longer ignore it.

We can’t live in a bubble, knowing what’s going on in Europe, in Spain. We get get our information about all mainly visually – from the news. And we live in the age of the cynics. So I studied the Diogenes school of the cynics (they were around 300 years before Christ). And I also studied cynics in the modern world – if we don’t see we don’t believe. We are also sceptics about politicians.

But the background sound in the exhibition has nothing to do with the cynics. It’s a symphony of cicadas from different parts of the world. In England there is just one type of cicada (from the New Forest), others are from Brazil, Indonesia, Africa – different places. I love cicadas. They spend years underground, and when they come out, they need to have the most beautiful sound as part of procreation. So it’s a language. They play the sound with their tymbals, muscles in their stomachs, abdominals – so it’s a tymbal cymbal! They listen for a new arrival, then they start all together. The complexity of the language…again, it is more information beyond our perception and understanding. A cicada from Indonesia sounds like an electronic instrument, but no, its a little five centimetre animal, looking for a partner! The sound is so sophisticated. I like to bring people up against their limitations – what you hear is not what you think. It is something more.

And then we have the audio and the olfactory playing together, creating another scenario. And that goes into the mind of the perceiver – who will finish the piece in their own way.

11d ago1w ago
Subscribe
Unsubscribe
月ごとの
A podcast about life, the universe and anthropology produced by David Boarder Giles, Timothy Neale, Cameo Dalley, Mythily Meher and Matt Barlow. Each episode features an anthropologist or two in conversation, discussing anthropology and what it has to tell us in the twenty-first century. This podcast is made in partnership with the American Anthropological Association and with support from the Faculty of Arts & Education at Deakin University.
L
Let's Master English! An English podcast for English learners

10m ago10m ago
Subscribe
Unsubscribe
月ごとの
The Let's Master English podcast is for ESL (English as a Second Language) learners! This podcast has many features--news, Q&A, English learning advice and other fun sections. You can join the Let's Master English community on Google+ and see the full transcripts. Transcripts are made by you, the listeners! I hope you enjoy my podcasts and please visit my website--www.letsmasterenglish.com!
M
Math Ed Podcast

18d ago2w ago
Subscribe
Unsubscribe
月ごとの
Learn Hindi with Free Podcasts Whether you are student or a seasoned speaker, our lessons offer something for everyone. We incorporate culture and current issues into each episode to give the most informative, both linguistically and culturally, podcasts possible. For those of you with just the plane ride to prepare, check our survival phrase series at HindiPod101.com. One of these phrases just might turn your trip into the best one ever!
G
Grammar Girl Quick and Dirty Tips for Better Writing

5d ago5d ago
Subscribe
Unsubscribe
月ごとの+
In this podcast, German podcaster Annik Rubens talks slowly about topics of everyday German life, from beergardens to recycling. More information and Premium Podcast with learning materials on Slow German at www.slowgerman.com. You can read the complete transcript of each episode on this internet-site or in the ID3-Tags.
I
IELTS Podcast

11M ago45w ago
Subscribe
Unsubscribe
月ごとの
BackStory is a weekly public podcast hosted by U.S. historians Ed Ayers, Brian Balogh, Nathan Connolly and Joanne Freeman. We're based in Charlottesville, Va. at Virginia Humanities. There’s the history you had to learn, and the history you want to learn - that’s where BackStory comes in. Each week BackStory takes a topic that people are talking about and explores it through the lens of American history. Through stories, interviews, and conversations with our listeners, BackStory makes histo ...
I
Intelligence Squared U.S. Debates

12h ago12h ago
Subscribe
Unsubscribe
月ごとの+
America feels divided. From the most salient questions about our national identity and place in the world, to fundamental concerns about technology, religion, the economy, and public policy, Intelligence Squared U.S. is here to help. A respite from polarized discussions, we bring together the smartest minds to debate and dissect issues in depth, restoring civility and bringing intelligence to the public square in the process.
500+以上のトピックを聴こう